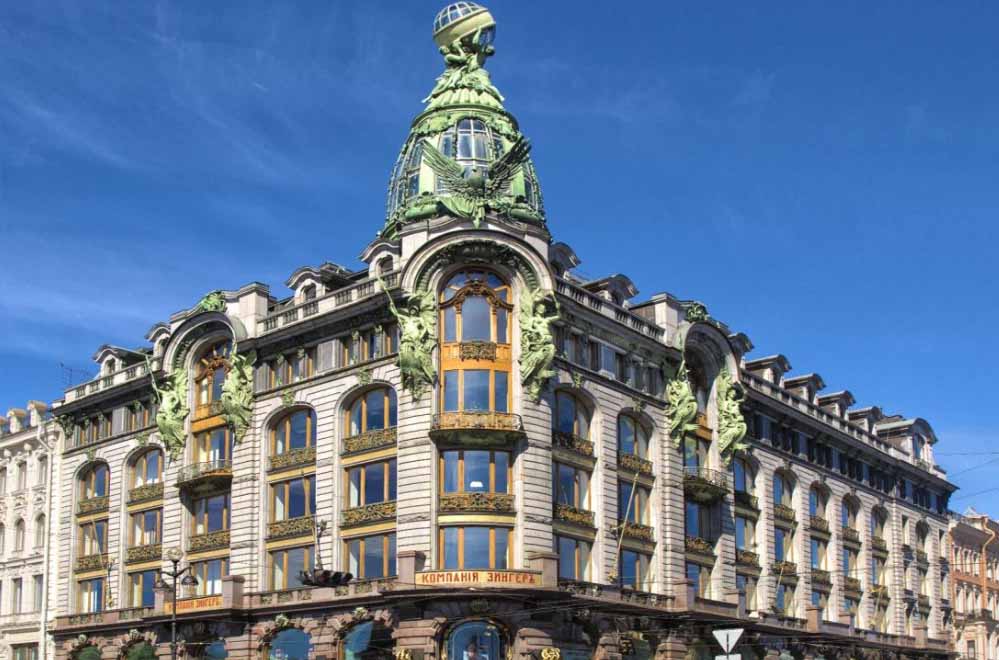 Singer's House is one of the most recognizable buildings in St. Petersburg. Built at the beginning of the XX century by the American manufacturer of sewing machines "Singer". Initially, it was planned to build a skyscraper, but according to the law of that time, buildings could not be higher than the Winter Palace. The presented project caused a lot of criticism, but Emperor Nicholas II did not listen to criticism and allowed the German company to implement the project. The construction took place according to a unique technique, thanks to which the work time was reduced and huge windows were created, which became the main architectural feature of the facade. The mass of the glass of one window reaches 100 kg. It was the most technically equipped building of that time. In the courtyard there was an atrium under a roof of impact-resistant glass. The building is decorated with sculptures, a tall glass tower in the form of a globe rises above the front facade, the diameter of which is about 3 m. The globe was equipped with electric lamps, the inscription "Singer" shone in the night.

After the revolution, Singer's House was transferred to Petrogosizdat. One of the largest bookstores in the country, the House of Books, was opened there. Here you could meet famous poets and writers A. Tolstoy, S. Marshak, A. Barto. The House of Books was not closed even during the Leningrad blockade. Nowadays, the Singer House houses one of the largest bookstores in Europe with a total area of about 3000 sq. m.