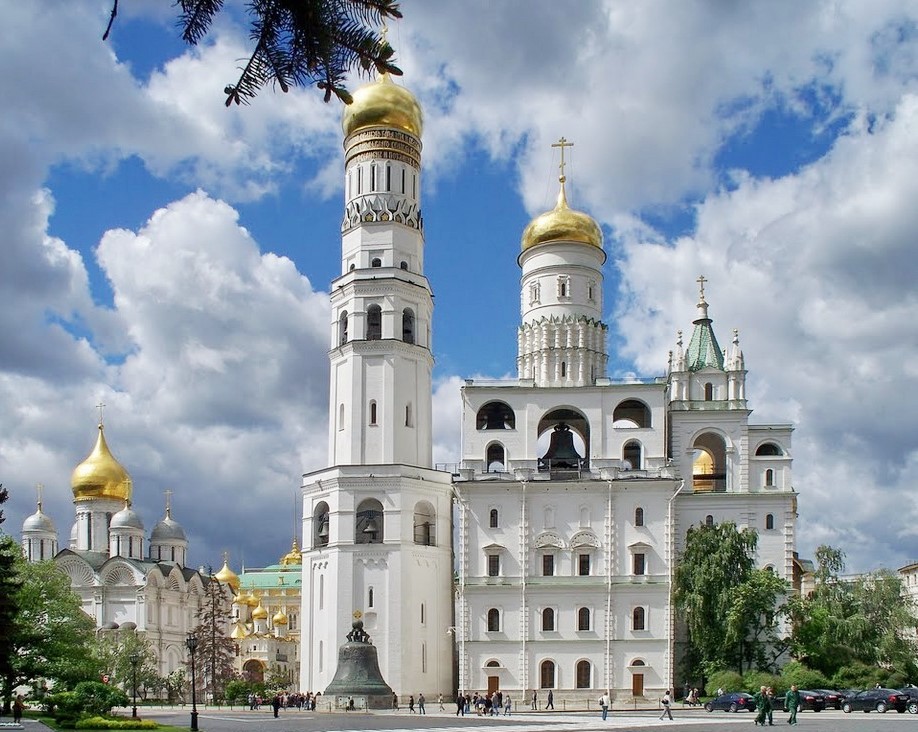 In the center of the Kremlin on Cathedral Square stands a miracle of architecture of the XVI century-the bell tower of Ivan the Great. In general, this is a whole ensemble of a bell tower, a church and a Filaret extension, the dominant of which, undoubtedly, is the bell tower with a height of 81 meters. This is the tallest building of the Kremlin, an expression of the power and strength of Moscow. It served as a watchtower, a fire tower, and an ornament of the capital. In Moscow, there was even a ban on the construction of buildings higher than "Ivan the Great". Previously, the square where the bell tower stands was called Ivanovskaya, royal decrees were read from it "in all Ivanovskaya" - that's where the famous expression came from. The bell tower was built for almost 300 years. The church " under the bells "was founded at the beginning of the XIV century by Ivan Kalita, then two hundred years later a bell tower was built in its place and only a century later, under Boris Godunov, the height of" Ivan the Great " reached 81 meters. The bell tower is a three-tiered pillar of octahedrons decreasing upwards. Each has a terrace and an open gallery, in the arched spans are placed bells, which are monuments of Russian foundry art. There are 22 of them in total - no Moscow church can boast of such a "luxury". All the bells are decorated with ornaments and inscriptions with their history. The restorers ' research has shown that the base of the bell tower has a depth of just over four meters. Its strength is the result of the skill of architects: iron piles are mounted inside the brick walls, and the solution is mixed with egg yolk. Bell ringing in the Kremlin was banned in 1918. "Ivan the Great" was silent for 71 years, and only in 1992 the gospel was heard. Interesting facts: Napoleon ordered to get the cross from the bell tower – because he believed that it was gold, but the cross turned out to be copper. The brave man who delivered it was executed, and the cross itself has not yet been found… The retreating French tried to blow up the bell tower with outbuildings, but "Ivan the Great" remained unshaken. The whole of Moscow went to look at the ruins, in the middle of which the bell tower stood majestically. They believed that as long as "Ivan the Great" stands, Moscow will stand.

Now the white-stone ensemble is an ornament of the Kremlin, there is a museum in the bell tower, and an observation deck on the top. But we will have to overcome 329 steps, and not everyone can do it.

← State Historical Museum↑ MoscowBell tower of the Church of St. Sophia of the Wisdom of God →