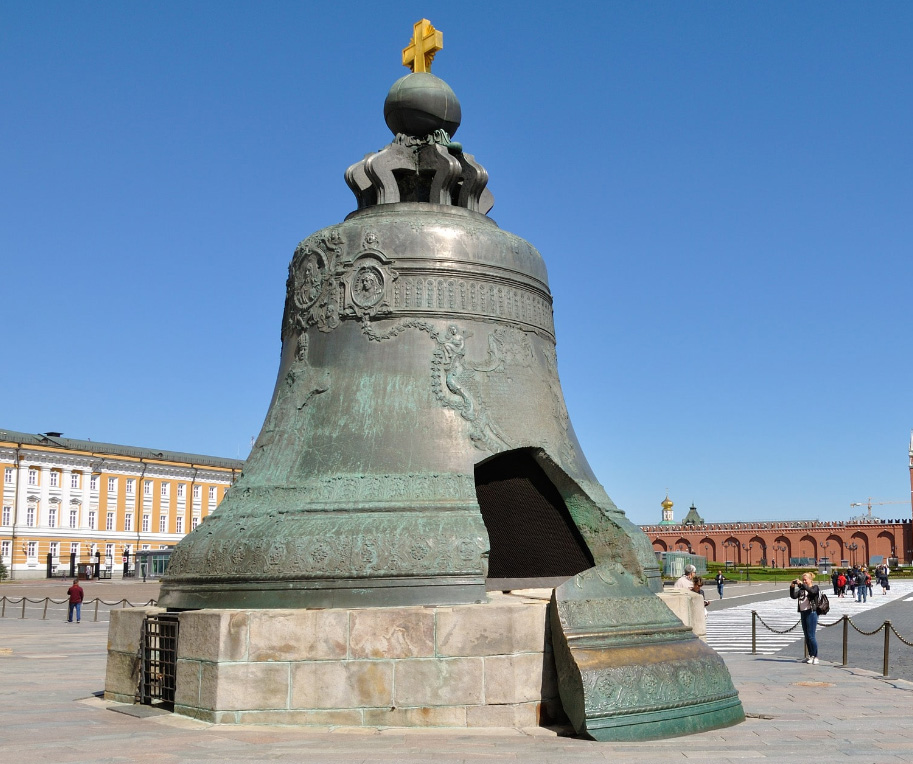 The Tsar Cannon and the Tsar Bell located next to it are unique creations of foundry art, they amaze not only with their size, but also with their amazing history. Some consider them the creation of a national genius, others recall the lines: "You can't understand Russia with your mind." Whatever it was, but these two masterpieces are the main attractions of the Moscow Kremlin.

In the summer of 1730, the Empress Anna Ioannovna ordered to cast a bell, which had no equal in the world. And after five years, the bell weighing 200 tons was ready. Interesting fact: the Tsar Bell had its own ancestors, i.e. this bell was the fourth in a row, and it was cast from the remains of the broken previous bell, but surprisingly, everyone had a tragic fate – the bells fell and broke for various reasons, and the Tsar Bell lay in a pit for almost 100 years and a piece of 11 tons broke off from it during a fire. Then it was raised and installed on a pedestal in the Kremlin as a monument to the great art of Russian foundry masters. The bell was cast by the father and son of Motorina. The question of soldering the Tsar Bell and using it for its intended purpose was raised several times. However, experts say that it will not be possible to get a clear sound after soldering. By the way, no tongue was made for the Tsar Bell, and the one that lies on the pedestal was taken from another, unknown bell. And the bell was nicknamed "Silent", in its entire history it has never rung… There is an incredible legend about the Tsar Bell. According to it, the bell was cast in the time of Peter the Great. When the tsar returned to Moscow after the Battle of Poltava, all the bells rang in honor of the victory. Only one bell did not ring, despite all the efforts of the bell ringers to shake the bell tongue. In anger, Peter I sent a company of soldiers to help, but they only tore off the tongue, and the Tsar Bell did not ring. The tsar struck the bell with the baton of the Swedish king and then a piece broke off, and the bell itself went underground.

In 1941, the bell housed the communications center of the Kremlin Regiment. So that the giant did not shine and was not visible to German bombers, it was specially painted. Such unique exhibits are located on the territory of the Kremlin, decorating an ancient monument and leaving distant events of the past in our memory.